All About the New Vikings Stadium

All About the New Vikings Stadium:

The new Vikings stadium has been announced, and we have all the details for you. The main thing fans come away after doing research is: glass. The roof will not open and close, however half of it will be see-through, which will be good for winter months. Fall Vikings games are fun if they are outside or partically outside, but winter games are not fun outside.There will be five 95 foot high retractable doors on the west side that will open to connect the building to a public plaza. This plaza will highlight views of the downtown Minneapolis skyline, which everyone is excited abuout.  Most of the walls will be glass and with "most of the rest of the exterior covered by a zinc material that architects say will change color in different light". This new stadium will add to the Minneapolis skyline and become an iconic Minnesota landmark.

The controversy of the new Vikings stadium tends to be with the financial portion. People are hesitant about the new Vikings Stadium because they are using $500 million in public money for the stadium. And this stadium is apparently going to cost $975 total. It will be interesting to see who pulls through to cover the rest of the cost. Can you envision a Target Stadium amoung Target Field and Target Center? The team hopes to begin play in the new stadium by the 2016 season. We will keep you updated with any changes and gossip as your number one source for Vikings news.

In addition to a great selection of seats, we guarantee your Vikings tickets. Reserve your spot in the Dome soon, this is your last chance before the new stadium! The Minnesota Vikings Football tickets will be in soon!  We will have Vikings Tickets available now for all games, home and away. Reserve your spot to watch the 2013 Vikings soon. You have to buy tickets to your favorite games so you don't miss out. The last season at the Dome is going to be great and we have tickets. 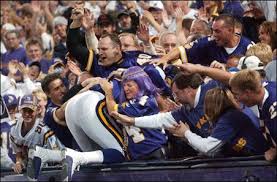