Even without Adrian Peterson in his usual action, the Minnesota Vikings were able to stop the Philadelphia Eagles on Sunday, December 15th. The final score was 48-30 and Vikings fans couldn't be happier with the outcome.

Mass Cassel and the Minnesota Vikings:

Matt Cassel was on top of his game and passed for two touchdowns and 382 yards. This is surprisingly the best a Minnesota quarterback has done since Brett Favre was here. Cassel ran for another score to lead the somewhat injury-depleted Vikings to that 48-30 victory. The Eagles had a five-game winning streak that is now over. 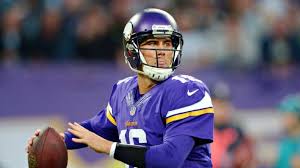 The Vikings has a current record of  4-9-1 and the Eagles are 8-6. What's up next for the Vikings? The Minnesota Vikings play the Cincinnati Bengals on December 22nd at 1 pm.