Did you watch the Vikings Steelers game as they played in London, England this past Sunday? Well, Greg Jennings certainly showed Vikings fans everywhere that the Vikings have someone other than Adrian Peterson who can make big plays. Thank gosh. Both Greg Jennings and Adrian Peterson provided the kind of team work Minnesota had been hoping for when it signed the wide receiver in the offseason.

Vikings vs. Steelers in London, England:

Both Greg Jennings and Adrian Peterson scored two touchdowns to help with the 34-27 win over the Pittsburgh Steelers at London's Wembley Stadium for the Vikings' first (and hopefully not last) victory of the season. The Steelers, on the other hand, fell to 0-4 for the first time since 1968. Goodbye playoff dreams? Not saying the Vikings are any better off, but 3-1 is a whole lot better than 4-0.

Now this is just a personal game highlight, but Greg Jennings provided the biggest highlight. He broke several tackles on a 70-yard catch-and-run that opened up a 10-0 lead for the Vikings in the first quarter. And then not to be outdone (like always), Peterson ran for a 60-yard touchdown in the second quarter. I loved this action on the field! This is the Vikings I know and love! 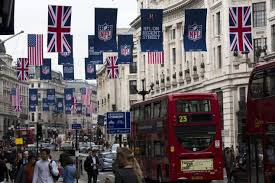