The Minnesota Vikings are a professional American football team that are based in Minneapolis, Minnesota. The Vikings joined the National Football League (NFL) as an expansion team in 1960, and first took the field for the 1961 season. Your favorite football team currently participates in the North Division of the National Football Conference (NFC); prior to that the Vikings were in the NFC Central Division, and before that they were in the NFL's Western Conference Central Division.

The Vikings play their home games at the Hubert H. Humphrey Metrodome in Minneapolis as they have since 1982 (a bill was passed in May 2012 to build a new stadium for the team, which is expected to open by the 2016 season). From the team's first season in 1961 to 1982, the team had called Metropolitan Stadium in suburban Bloomington home. The Vikings conducted summer training camp at Bemidji State University from 1961–65. In 1966, they moved their training camp to Minnesota State University in Mankato, and they still have training camp here.

Although some years it may not seem like it, since the team's first season in 1961, the Vikings have had one of the highest winning percentages in the NFL. WHOA! They are also one of only six NFL teams to win at least 15 games during the regular season. The Vikings have won one NFL championship, in 1969, prior to the league's merger with the American Football League (AFL). Since the merger, they have made the playoffs 24 times, third most in the league. Despite producing some of the best teams in NFL history over the years, the Vikings have not won a Super Bowl. The team has played in four Super Bowls (IV, VIII, IX, and XI), though losing in each one. The team currently has eleven members in the Pro Football Hall of Fame. We're impressed, Go VIKINGS!

From the team's debut in 1961 to 1995, the Vikings' logos and uniforms essentially remained the same. Reflecting Minnesota's Scandinavian cultural heritage, one of the team's two primary logos consists of a profile of a blond norseman, while the other consists of a white Viking horn.

The team's helmet is purple with a Viking horn logo on each side. Each horn is outlined in gold. The horn logo was slightly revised in 2006. The original uniform design consisted of white pants, gold trim, and either purple or white jerseys.

The current team mascot is Ragnar (played by Joseph Juranitch). Ragnar has been working for the Vikings since 1994 and claims to be the most widely-recognized mascot in the world.

Skol, Vikings is the fight song of the Minnesota Vikings. It was introduced around the time the team was founded in 1961. It is always played whenever the team scores a touchdown, enters half-time, and at the end of regulation. Whip that out whenever the Vikings win!! 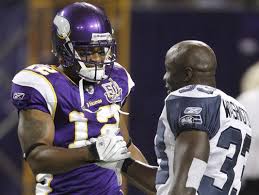